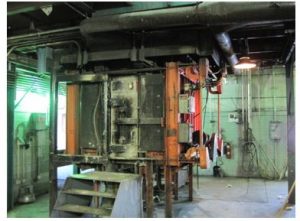 The coal preparation plant from Booth Street was moved to Clover Bar, just outside Edmonton, AB.  Research work was managed by Mr. Jack C. Botham under the direction of the Technical Committee and centered on coal pipelining, additives to coking charges, hot briquetting, formed coke, and petrographic methods for all coals.  Arrangements were made to establish a coking facility at Clover Bar to accommodate the Western Canadian Coal producers.  Algoma arranged to donate their Koppers pilot coke oven.  A mini fluidized bed was constructed for heating coal for hot briquetting as part of the formed coke project and by 1974, this facility was operational.  EMR hired Drs. John Gransden and  John Price who became the backbone of the Technical program and have gained international recognition as coal carbonization scientists.

In the early 1970s, a major focus for research was the fact that Western Canadian coal contains a significant amount of reactive semi-fusinite compared to traditonal Appalachian coals from the USA.  During this period, R&D programs focused on petrographic analysis and coking tests helped place Western Canadian coal at the forefront of having excellent coking behaviour, and producing excellent coke quality.  CCRA has spent much effort explaining the benefits of these coals by using its research program to develop technical projects and has presented numerous papers supporting the technical merits of Western Canadian coals.  This work is ongoing today as membership changes.

When the energy crisis developed in 1973-74 concern about energy self-sufficiency and sustainability became very important.  This crisis resulted in a number of oil companies getting involved in the coal mining business.  CCRA membership then included Shell Canada, Esso Resources, BP Canada and Gulf Canada.

The organization underwent a substantial change in 1975 when the movable wall coke oven crewswitched from being CCRA employees to EMR term employees, to conform with Government policy.  CCRA established a new Treasurer system to handle the organization’s financial affairs and research funding.  This change resulted in the Treasurer’s position becoming an appointed officer with full financial authority for the Association.  At the time, Mr. George A. Chapman was appointed as Treasurer.