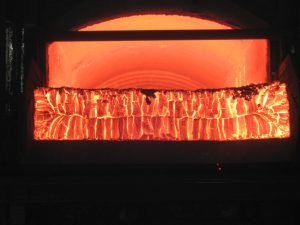 The 45th anniversary of CCRA’s foundation was celebrated in 2010.  In 2010-2011, the Association started on a very ambitious project to carry out engineering, design, construction and commissioning of an Energy Recovery Pilot Coke Oven (ERCO) at Bells Corners coal and coke facilities.  The ERCO technology is an alternate approach to traditional slot coke oven technology  and the fact that pilot facilities using ERCO technology are essentially non-existant, R&D cannot be carried out.  CCRA’s goal for this project was to put Canada at the leading edge of this technology by having a facility where its members could be able to investigate how coal behaves in this type of oven and generate valuable data to allow the Canadian steel industry to evaluate this alternative technology.  This facility would also be used to showcase the cokemaking merits of Western Canadian coals using this technology globally as well as making use of it to conduct research on the incorporating of in coal blends for assessing coke quality.

Due to the capital costs to finance such a large project, CCRA members contributed to a special fund.  CCRA also signed a Non Repayable Contribution Agreement with Natural Resources Canada to assist with the costs.  The Canadian Steel Producers Association (CSPA) also contributed to the project.  The goal was to secure the funding to enable the construction of the facility.  In 2011-12, SunCoke Energy, USA was invited to join CCRA as a strategic partner in developing the energy recovery cokemaking programme as they have owned and operated commercial ovens using this technology for many years.

The 2011–2012 fiscal year saw a growth in CCRA members as US Steel Canada, SunCoke Energy, Inc. joined.  Grande Cache Coal Corp., Alberta also rejoined the Association after being absent for some years.

During the 2013/2014 fiscal year, CCRA was obligated to transition from its original letters patent legal structure to comply with the requirements of the new Not-for-Profit Corporations Act.  As of January 1, 2013, CCRA received it’s Certificate of Continuance as Corporation Number 117455-0 Industry Canada.

In 2014-15, the CCRA with CanmetENERGY’s cooperation, provided a website for the Canadian Carbonization Research Association.  The website accessible at https://www.cancarb.ca/wordpress/ contains timely information on the CCRA/CanmetENERGY R&D programs and other information related to the Canadian Coal and Coke industry as a whole.

The CCRA celebrated its 50th year milestone of providing research support to the Canadian Coal and Carbonization industries on September 2, 2015.

On September 30, 2016, Mr. George Chapman retired as Treasurer of CCRA.  During his 40-year tenure in that function, Mr. Chapman provided important financial and administration stewardship of CCRA and support to the Board of Directors and Members.  The Board of Directors appointed Mr. Brian D’Amboise CPA, CA to succeed Mr. Chapman as Treasurer effective October 1, 2017.  Mr. D’Amboise has over 25 years of involvement with CCRA as the former external auditor to the Association and provided Mr. Chapman valuable assistance in completing the 2016-17 fiscal year end and related tax returns.

CCRA pursued a number of outside research initiatives during the 2016-17 fiscal year.  The Association continued work on the ISO Inter Laboratory Study on Coal Dilatation initiated in 2015-2016 and entered into a new research funding arrangement with Geoscience B.C. to support a study aimed at producing clean coal from Western Canadian Coal Fields using the water-based Roben Jig process.  In addition, further studies on coal stamp charging and small-scale coking were developed to meet members future needs.

During 2017-18 fiscal year, the CCRA wrote four papers for presentation at AISTech 2017 in Nashville, USA and a report on Producing Clean Coal from Western Canadian Coalfields using the Water-Based Roben Jig Process in Geoscience BC Summary of Activities 2017.  It made a presentation on this work at CoalSMART 2018 and organized two Working Group meetings on use of Biocarbon in Canadian Steel Industry (November 2017 and January 2018).

As well, the new PCI experimental rig at CanmetENERGY-Ottawa was upgraded to allow for better control of coal feeding rate and hot blast composition.  A new approach was developed in processing the experimental data including the introduction of two new parameters to quantify the extent of gasification of coal Volatile Matter and Fixed Carbon and a new approach using TGA was developed to quantify the reactivity of combustion residues.  Going forward, work will focus on enhancing the rig’s capability in terms of NG/COG co-injection, blast gas moisture control and off-gas analysis.

On the use of renewable energy for the steel industry, research was pursued on a number of fronts including (1) Pyrolysis Technology Evaluation (2) Bio-Carbon for EAF Steelmaking (3) Bio-Briquette Formation (4) Bio-Carbon for Direct Injection in Blast Furnace Ironmaking (5) Biochar Production and Handling.

In 2018-19, the CCRA published three papers in peer-reviewed journals on (i) “Value-In-Use of Renewable Biocarbon for Direct Injection in Blast Furnace Ironmaking“ in Ironmaking and Steelmaking journal (ii) “Development of novel method for quantitative determination of carbon chemical reactivity” in Canadian Journal of Chemical Engineering and (iii) “Carbonaceous material properties and their interactions with slag during electric arc furnace steelmaking” in Metallurgical and Materials Transactions B; it wrote papers for presentation at AISTech 2018 in Philadelphia, USA, for 8th International Conference on Science and Technology of Ironmaking in Vienna, Austria and a report on Producing Clean Coal from Western Canadian Coalfields using the Water-Based Roben Jig Process: Refining the Process in Geoscience BC Summary of Activities 2018. It made a presentation on this work at Western Canadian Coal Society in February 2019 and organized four Working Group meetings on use of Biocarbon in Canadian Steel Industry (April, June and November 2018 and March 2019).

Again in 2018-19, the CanmetENERGY Bioenegy group was a strong partner and made valuable contributions in assessing existing biomass conversion technologies, in the handling and cleaning and processing and carbonization.

The Biocarbon for Iron and Steel production and other large emitters’ project successfully secured S&T funding until March 2022.

In 2018-19, four meetings of the CCRA-Biocarbon for Steel Working Group were held at CanmetENERGY-Ottawa.  These meetings were successful in advancing the discussion and interest level among the numerous project partners.

Going forward, the CCRA Biocarbon for Steel Working Group and its members need to better define their plan and vision to 2025 around biomass production, supply, utilization, etc., including potential barriers at each level.